Getting started with Django middleware

Django comes with a lot of useful features. One of them is middleware. In this post I'll give a short explanation how middleware works and how to start writing your own.

The source code included in this post is available on GitHub.

Middleware allows you to process requests from a browser before they reach a Django view, as well as responses from views before they reach a browser. Django keeps a list of middleware for each project. You can find it in settings, under the name MIDDLEWARE. Each new Django project already has a bunch of middleware added to that list, and in most cases you should not remove anything from that list. You can, however, add your own.

Middleware is applied in the same order it is added to the list in Django settings. When a browser sends a request, it is processed like this:

A view receives a request, performs some operations, and returns a response. On its way to the browser, the response has to go through each middleware again, but in reversed order:

This is a very brief explanation. More detailed description can be found in Django documentation.

We will start with a simple middleware that measures the time it takes to process a request. All examples in this post use Django 3.0.5 and Python 3.6.9.

First, create a Django project with a single application. Ignore the migrations, examples from this post will not use a database. Create a file called middleware.py in your application: that's where we will put most of the code.

Don't forget to register your application in django_middleware/settings.py:

Now you can run the project:

According to Django documentation, there are 2 ways of creating a middleware: as a function and as a class. We will use the first method, but the last example will show you how to create a class too.

The general structure of a middleware in Django looks like this (example copied from Django docs):

In our example, we want to check how long the whole process of handling a request takes. Edit intro/middleware.py file like this:

In this example, we measure the time in seconds (time.time()) before and after the request, and we print the difference.

The next step is to install the middleware, to let Django know that we are going to use it. All we have to do is to add it to django_middleware/settings.py:

Now we are ready to test it. Open your browser and navigate to localhost:8000. In the browser you should see the default Django project page (the one with the rocket). In the command line (where you called python manage.py runserver) you should see something similar to this:

Our middleware does quite well, printing information to the command line. But we can go a step further: how about adding something to the request, so that our views can use it later? Since we are in the timing business, how about adding the date and time the request took place?

This modification will be quite easy. Edit intro/middleware.py file like this:

We've added 2 lines: import datetime and request.current_time = datetime.datetime.now(). Together, they will add the current time to our request. Now, we need a view to display that time. Edit intro/views.py:

For such a simple example we do not need a template, we can create a HttpResponse object directly in our code.

Now we need a URL for our view. Create a file intro/urls.py and edit it:

Remember to edit django_middleware/urls.py too:

Let's test it. Open localhost:8000 in your browser. You should see something like this:

Refresh the page several times, to check that you will get different results (the time should be updated for each request).

It's time for a bit more interesting example. Consider this real-life situation: you write a program and it doesn't work. Happens to the best of us, don't worry. What do you usually do then? Do you check Stack Overflow for answers? You probably do, practically all coders do. How about we create a middleware that would do the search for us?

If our middleware is defined as a function, than we can implement process_exception like this:

In our case, we want to send our exception to Stack Overflow and get links to the most relevant questions.

If you haven't used APIs before, don't worry. The general idea is: just like you send question to the internet using a web browser, API is a way for your code to send questions automatically.

Stack Exchange is kind enough to host an API for querying their websites. The base URL is https://api.stackexchange.com/2.2/search, after which you can put search params. And so, if you want to check 3 top results (sorted by votes) from Stack Overflow, tagged as "python" and dealing with Django, you can send a request like this: https://api.stackexchange.com/2.2/search?site=stackoverflow&pagesize=3&sort=votes&order=desc&tagged=python&intitle=django. Go ahead and check it in your browser. You should see something like this: 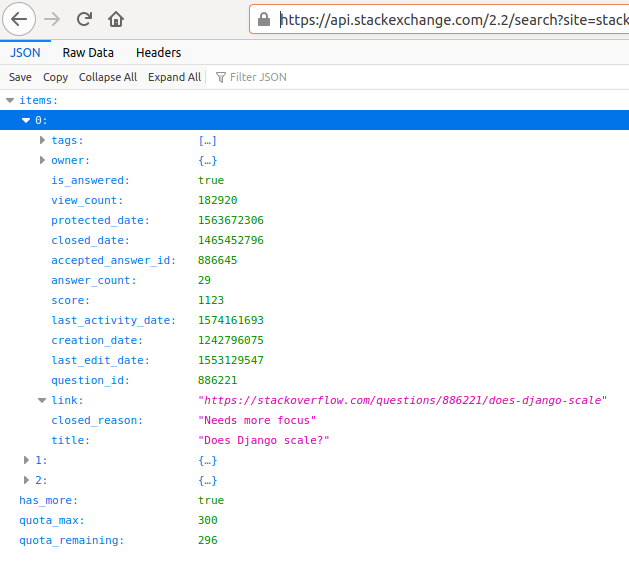 In Python, to send a request like this, we will use a module called requests

Every time a view raises an exception, our process_exception method will be called. We use the requests module to call Stack Exchange API. Most parameters are self-explanatory. They are the same as we used in the browser example, but instead of putting them all in a URL manually, we let the requests module do it for us. We just changed the tags (to search for Python and Django) and we use our exception as a string (str(exception)) to search the title of available questions. After we get a response from Stack Overflow, we put together a HTML containing a link to each relevant question. Hopefully, we can find an answer to our problem there. Finally, that HTML is returned to the browser.

Please note that the response from Stack Overflow is not a normal web page, but instead it is a bunch of information in a format called JSON. That's why we call response.json() to get our results.

Of course, we need to install this new middleware:

The only problem we have now is that our view works perfectly. We need to break it a bit if we want our new middleware to have some exceptions to process. Edit intro/views.py:

Keep in mind that process_exception method will be called only for actual exceptions. Returning HttpResponseServerError or any other error code does not count.

It's time to test it. Open localhost:8000 in your browser. You should see something like this:

The middleware we just created is a bit more complicated than the initial examples. As your code grows, it might be a better idea to manage middleware as classes, not functions. Our Stack Overflow middleware as a class would look like this:

Most of the code looks similar, but for a class we need to store the get_response callback in our instance and use it for every __call__ method call. If you prefer this version, don't forget to change the settings:

These were very simple examples, but middleware can be used for many other things, like checking an authorization token, finding a proper user, and attaching that user to the request. I'm sure you can find a lot of ideas on your own, and hopefully this post will help you get started. If you think something is missing or if you spot a mistake, please let me know!